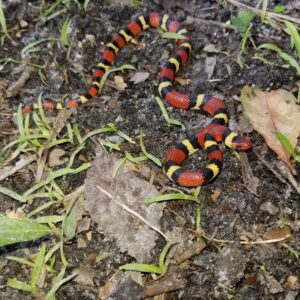 The St. Johns Botanical Garden and Nature Preserve doesn’t just have plants!  The wildlife here is phenomenal. Because of the unique natural habitat in the preserve, combined with the tropical and desert plants in the garden, the SJBGNP abounds with flora AND fauna.
The preserve is a birdwatcher’s dream, with many species of warblers, sparrows and other birds not often seen in the North Florida pine woods. Many migrants also stop because of the open grassy areas, tall trees and abundant water resources. These include rose breasted grosbeaks, painted buntings, robins, scarlet tanagers, and many others. The regulars seen are cardinals, blue jays, wrens, tufted titmice, chickadees, flycatchers, catbirds, phoebes, kingfishers, and a variety of egrets, herons, ducks, owls, and hawks. Bald eagles and ospreys have been known to flyover, and hummingbirds are also very common!
Amphibians and reptiles are certainly plentiful in the garden and preserve. Tree frogs, including squirrel tree frogs, green tree frogs, and pine woods tree frogs are common. Spring peepers are often heard peeping in December and January on cool wet nights. Southern toads, spadefoot toads, oak toads, narrow mouthed frogs, little grass frogs, bronze frogs, river frogs, leopard frogs, pig frogs, and bullfrogs may all be seen or heard at various times of the year. Many turtles are also found on the property, including Florida box turtles, chicken turtles, snapping turtles, softshell turtles, musk turtles, mud turtles, as well as the ubiquitous sliders!
Snakes are also seen, and as elsewhere, will not bother you if they are left alone. Black racers are commonly seen scurrying about looking for lizards, frogs or mice. Florida banded water snakes may be seen basking or swimming in our small lake, but will swim away if you get too close. An unusual, very pretty, and perhaps undescribed subspecies of garter snake, which we are calling the eastern blue striped garter snake, is also often spied. 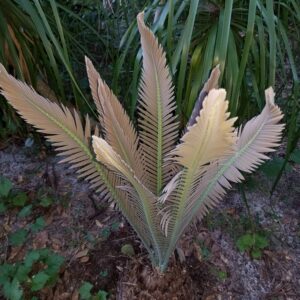 Other species flourish, but being shy and secretive, are rarely seen. These include ringnecks, red bellied snakes, rough earth snakes, pine woods snakes, ribbon snakes, rough green snakes and the stunningly beautiful brightly ringed scarlet kingsnake. And yes, like all of Florida, some venomous snakes are spotted at times. These snakes will always attempt to escape or hide by sitting still if they are discovered. They include coral snakes, pygmy rattlesnakes, cottonmouths, and an occasional copperhead. Diamondback rattlesnakes have not been seen on this property for over 20 years, and sadly, it is believed that they may be locally extinct.  Even the occasional migrating alligator passes through!
Mammals are also common. These include the native marsh rabbits, bats, mice and woodrats, gray squirrels, fox squirrels, skunks, raccoons, opossums, otters, foxes, bobcats, coyotes, and wild hogs; all of which are extremely secretive or nocturnal and will rarely be seen during the daytime. Bears have also been seen in the area, but that is an uncommon sighting.
And for lepidopterists, beautiful and sometimes rare butterflies, moths, damselflies and dragonflies may also be seen flying about the garden. We never tire of watching those graceful butterflies visit all of the flowers in the preserve!
In short, the SJBGNP is an animal lover’s haven. Classes from kindergarten to college will be welcome to hold field trips, and guided tours will also be available. Birdwatchers are also encouraged to hold their early morning forays, if they call or email ahead to set up a day. Don’t forget the coffee and donuts needed to fuel those early morning adventures!
As you can see, the St. Johns Botanical Garden and Nature Preserve isn’t just for plants… Our website will feature regular articles that spotlight plants AND wildlife here at the garden!