The St. Johns Botanical Garden & Nature Preserve (SJBGNP) is all about conservation of rare and endangered species of plants from around the world, as well as natural resources and native plants and animals. We will highlight different species on our website on a regular basis. One of the more delicate and beautiful species that occurs in natural areas of the SJBG is the Piedmont Azalea, Rhododendron canescens. This species is found across northern Florida in moist areas that border flood zones in hardwood forests. While inconspicuous most of the year, their blooms in the spring are hard to forget, ours being a mass of brilliant pink and white, fragrant flowers. Indeed, they are one of the earliest bloomers here at the garden, often appearing in early March. And we hope that someday they will be available in our native plant nursery. 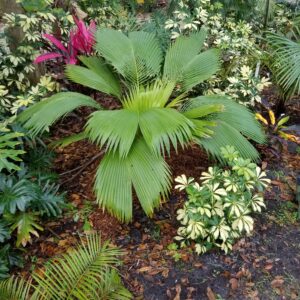 Many of the palms grown here are considered rare or endangered. One such tree is the giant windowpane palm, or Madagascar coconut palm, Beccariophoenix fenestralis. As young palms, these plants have the unusual feature of having partially fused leaves, which create the look of a fan palm leaf, but with holes between the fused leaflets! This is how it received its common name, the windowpane palm. Regardless of the micro-anatomy of the leaf, the young palm is stunningly beautiful and the epitome of a tropical appearing plant, as the broad leaves hang down and move gracefully with the slightest breeze. Unfortunately, the leaves lose this appearance as they grow, but the tree becomes very coconut like in its appearance, possessing long pinnate leaves. One of these gorgeous young palms may be seen in the “Island Palm” area of the garden. 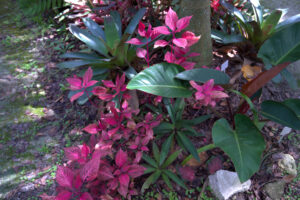 It is hoped that by preserving and educating the public about many of these endangered species, that we might help to protect such species from extinction in the not-too-distant future! Help us by adopting such palms or by making a donation to the garden. All donations are completely tax deductible.